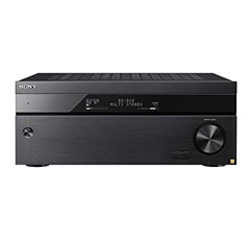 The number of channels is equal to the number of possible connected speakers. The Denon AVR-S650H supports 5.2-channels sound, but Sony STRZA5000ES supports a 9.2-channels configuration.

RMS stands for the actual power of the receiver. The higher this value, the louder the sound can be produced. The differences between the models in terms of RMS power are significant - for the STRZA5000ES this value is 130/8 W/Ohm, and for the AVR-S650H it is 75/8 W/Ohm.

The connectivity of competitors in our comparison is markedly different, Denon AVR-S650H scored 7, and Sony STRZA5000ES scored 6 out of 10.

Wireless connection via Wi-Fi is possible only on the Denon AVR-S650H.

Bluetooth connection is now one of the main communication protocols for the receiver's control or even music broadcasting. Of the two receivers reviewed, only Denon AVR-S650H has a built-in Bluetooth.

The presence of many connectors makes the receiver more versatile. But there are also narrowly targeted models, the number of connectors which are limited to a certain area of use. And when choosing their own receiver, users need to consider exactly your goals for using the receiver. For extensive connection, both receivers got 7 points on our 10-point scale.

HDMI eARC is the next step in the development of audio return channel technology, which works in conjunction with HDMI 2.1. Using eARC provides the highest sound quality for home audio systems. HDMI eARC is available only on Denon AVR-S650H.

Connecting a vinyl player or phonograph is possible using a Phono input which is represented by mini-jack or RCA connectors. Only the AVR-S650H has a Phono interface.

The AV receiver is the heart of the home theater. And in this case, support for all current video formats ensures the best user experience, so it is very important to consider this when choosing a device. Video features of the AVR-S650H were rated 6 out of 10 against the 9 for the STRZA5000ES.

In terms of evaluating additional features, the AVR-S650H got 10 points, but the STRZA5000ES has 6.

Voice control allows you to control the basic functions of the receiver through a smartphone, smart speaker or using the microphone that comes with the kit. The AVR-S650H can be controlled by voice via Amazon Alexa, Google Assistant, Siri, Josh.AI. Only the Denon AVR-S650H has the ECO mode.

Denon AVR-S650H got 5 points for the multichannel surround sound and Sony STRZA5000ES got 8.

Dolby Atmos' particularity is that this is the object-oriented sound format, that is, each audio signal object is independently sounded and connected to its spatial position. Sony STRZA5000ES can create 3D sound due to the Dolby Atmos support.

DTS:X is an algorithm used by the processor to create sound scenes, where sounds connected directly to objects rather than channels, and to determine the optimum sound output distribution in space. Surround sound with DTS:X is available on the STRZA5000ES.

IMAX Enhanced is a licensing and certification program under which home theater devices deliver crisp 4K HDR pictures and powerful sound as it was designed by the IMAX engineers. The STRZA5000ES licensed by IMAX.