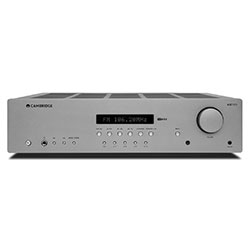 Let's make the Cambridge Audio AXR100 versus Integra DTM-7 comparison. According to the results of our review, Cambridge Audio AXR100 received 5.6 points out of 10 possible, and Integra DTM-7 was rated 7.1 points. The release date of AXR100 is 2019, and DTM-7 is 2018. After comparison, it will become clear that among these two devices, the DTM-7 is more suitable for the role of the heart of home theater system.

RMS stands for the actual power of the receiver. The higher this value, the louder the sound can be produced. In terms of RMS power, the models have the same characteristics - 100/8/8 W/Ohm.

The connectivity of competitors in our comparison is markedly different, Cambridge Audio AXR100 scored 6, and Integra DTM-7 scored 8 out of 10.

The presence of many connectors makes the receiver more versatile. But there are also narrowly targeted models, the number of connectors which are limited to a certain area of use. And when choosing their own receiver, users need to consider exactly your goals for using the receiver. For extensive connection, Cambridge Audio AXR100 got 5 points, but Integra DTM-7 received 6 points.

In terms of evaluating additional features, the AXR100 got 4 points, but the DTM-7 has 8.

Voice control allows you to control the basic functions of the receiver through a smartphone, smart speaker or using the microphone that comes with the kit. The DTM-7 can be controlled by voice via Google Assistant.