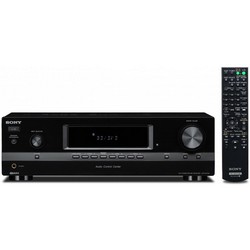 A modern AV receiver is perhaps one of the most sought after categories of home electronics. We've got one of these receivers for review - Sony STR-DH130. Based on the characteristics and features considered, the model received a score of 4 on a 10-point scale. The overall rating is too low, we would not recommend choosing this receiver. In 2012, this receiver was released. An amplifier with 2.0 channels is one of the main model’s feature.

Sony STR-DH130 back and front view