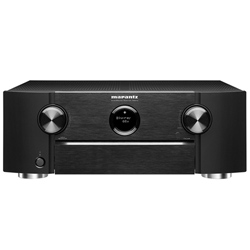 Audio and video content is becoming more and more qualitative, and for comfortable home consumption of this content, an appropriate device is needed. We bring to your attention an overview of Marantz SR6010, which can thus become your home entertaniment center. For its technological equipment, this receiver received an assessment of 7.8 points out of 10 possible. This is a receiver from Marantz released in 2015. The receiver is equipped with an amplifier that can handle 7.2 channels.

Marantz SR6010 back and front view