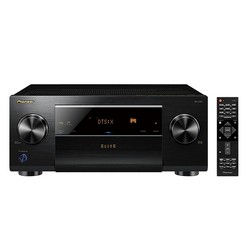 Along with the growing popularity of custom home theater builds, the comparison of Pioneer SC-LX701 and Pioneer VSX-LX504 takes place. According to the results of our review, Pioneer SC-LX701 received 8.5 points out of 10 possible, and Pioneer VSX-LX504 was rated 8.8 points. The release date of SC-LX701 is 2016, and VSX-LX504 is 2019. Based on the data on the characteristics and features of both models, we can conclude that VSX-LX504 has better performance than SC-LX701.

For the built-in amplifier, the devices received different marks - 8 and 9, respectively, on a 10-point scale.

RMS stands for the actual power of the receiver. The higher this value, the louder the sound can be produced. The differences between the models in terms of RMS power are significant - for the SC-LX701 this value is 135/8 W/Ohm, and for the VSX-LX504 it is 120/8 W/Ohm.

Speaker A/B switching allows you to change between the main and sub speaker set. Pioneer SC-LX701 can work with the main and additional set of speakers - and switch between them.

The presence of many connectors makes the receiver more versatile. But there are also narrowly targeted models, the number of connectors which are limited to a certain area of use. And when choosing their own receiver, users need to consider exactly your goals for using the receiver. For extensive connection, Pioneer SC-LX701 got 9 points, but Pioneer VSX-LX504 received 8 points.

In terms of evaluating additional features, the SC-LX701 got 8 points, but the VSX-LX504 has 9.

Voice control allows you to control the basic functions of the receiver through a smartphone, smart speaker or using the microphone that comes with the kit. The VSX-LX504 can be controlled by voice via Amazon Alexa.

Pioneer SC-LX701 got 7 points for the multichannel surround sound and Pioneer VSX-LX504 got 8.

IMAX Enhanced is a licensing and certification program under which home theater devices deliver crisp 4K HDR pictures and powerful sound as it was designed by the IMAX engineers. The VSX-LX504 licensed by IMAX.