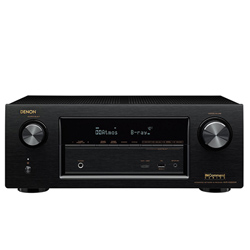 The number of channels is equal to the number of possible connected speakers. The Yamaha AVENTAGE RX-A3080 supports 9.2-channels sound, but Denon AVR-X3200W supports a 7.2-channels configuration.

RMS stands for the actual power of the receiver. The higher this value, the louder the sound can be produced. The differences between the models in terms of RMS power are significant - for the AVENTAGE RX-A3080 this value is 150/8 W/Ohm, and for the AVR-X3200W it is 105/8 W/Ohm.

Speaker A/B switching allows you to change between the main and sub speaker set. Denon AVR-X3200W can work with the main and additional set of speakers - and switch between them.

DLNA is the perfect way to use your local cloud storage to stream movies and music directly to a TV. You can use the DLNA protocol only with Denon AVR-X3200W.

Connecting a vinyl player or phonograph is possible using a Phono input which is represented by mini-jack or RCA connectors. Only the AVENTAGE RX-A3080 has a Phono interface.

Voice control allows you to control the basic functions of the receiver through a smartphone, smart speaker or using the microphone that comes with the kit. The AVENTAGE RX-A3080 can be controlled by voice via Amazon Alexa, Google Assistant.