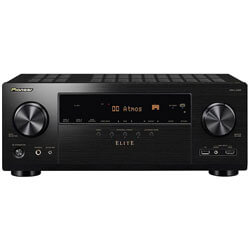 For the built-in amplifier, the devices received different marks - 7 and 9, respectively, on a 10-point scale.

The number of channels is equal to the number of possible connected speakers. The Sony STR-DH790 supports 7.2-channels sound, but Pioneer Elite VSX-LX305 supports a 9.2-channels configuration.

RMS stands for the actual power of the receiver. The higher this value, the louder the sound can be produced. The differences between the models in terms of RMS power are significant - for the Elite VSX-LX305 this value is 225/6 W/Ohm, and for the STR-DH790 it is 90/6 W/Ohm.

Speaker A/B switching allows you to change between the main and sub speaker set. Sony STR-DH790 can work with the main and additional set of speakers - and switch between them.

The connectivity of competitors in our comparison is markedly different, Sony STR-DH790 scored 6, and Pioneer Elite VSX-LX305 scored 8 out of 10.

The presence of many connectors makes the receiver more versatile. But there are also narrowly targeted models, the number of connectors which are limited to a certain area of use. And when choosing their own receiver, users need to consider exactly your goals for using the receiver. For extensive connection, both receivers got 7 points on our 10-point scale.

HDMI-CEC helps gadgets attached to your TV to link back and forth with your TV via HDMI ports. It is become possible to control all linked devices with one remote. The STR-DH790 features HDMI CEC.

Connecting a vinyl player or phonograph is possible using a Phono input which is represented by mini-jack or RCA connectors. Only the Elite VSX-LX305 has a Phono interface.

The AV receiver is the heart of the home theater. And in this case, support for all current video formats ensures the best user experience, so it is very important to consider this when choosing a device. Video features of the STR-DH790 were rated 7 out of 10 against the 8 for the Elite VSX-LX305.

With the 4K pass-through feature, the AV receiver sends "native" 4K signals to a 4K TV from a video source without any processing. The STR-DH790 works with the 4K/60Hz video, and the Elite VSX-LX305 has the 4K/120Hz.

In terms of evaluating additional features, the STR-DH790 got 6 points, but the Elite VSX-LX305 has 9.

Voice control allows you to control the basic functions of the receiver through a smartphone, smart speaker or using the microphone that comes with the kit. The Elite VSX-LX305 can be controlled by voice via Amazon Alexa, Google Assistant, Siri, Josh.AI.

Sony STR-DH790 got 7 points for the multichannel surround sound and Pioneer Elite VSX-LX305 got 8.