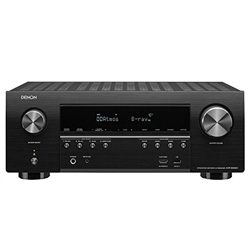 An overview of Denon AVR-S940H and Yamaha RX-A8A will help us understand the many features that the devices are equipped with. According to the results of our review, Denon AVR-S940H received 7.4 points out of 10 possible, and Yamaha RX-A8A was rated 9.4 points. The release date of AVR-S940H is 2018, and RX-A8A is 2021. And as a result of the review, it becomes clear that AVR-S940H is inferior in audio processing features to RX-A8A.

For the built-in amplifier, the devices received different marks - 7 and 10, respectively, on a 10-point scale.

The number of channels is equal to the number of possible connected speakers. The Denon AVR-S940H supports 7.2-channels sound, but Yamaha RX-A8A supports a 11.2-channels configuration.

RMS stands for the actual power of the receiver. The higher this value, the louder the sound can be produced. The differences between the models in terms of RMS power are significant - for the RX-A8A this value is 150/8 W/Ohm, and for the AVR-S940H it is 90/8 W/Ohm.

The connectivity of competitors in our comparison is markedly different, Denon AVR-S940H scored 7, and Yamaha RX-A8A scored 9 out of 10.

The presence of many connectors makes the receiver more versatile. But there are also narrowly targeted models, the number of connectors which are limited to a certain area of use. And when choosing their own receiver, users need to consider exactly your goals for using the receiver. For extensive connection, Denon AVR-S940H got 9 points, but Yamaha RX-A8A received 10 points.

HDMI eARC is the next step in the development of audio return channel technology, which works in conjunction with HDMI 2.1. Using eARC provides the highest sound quality for home audio systems. HDMI eARC is available on Yamaha RX-A8A.

The AV receiver is the heart of the home theater. And in this case, support for all current video formats ensures the best user experience, so it is very important to consider this when choosing a device. Video features of the AVR-S940H were rated 6 out of 10 against the 9 for the RX-A8A.

With the 4K pass-through feature, the AV receiver sends "native" 4K signals to a 4K TV from a video source without any processing. The AVR-S940H works with the 4K/60Hz video, and the RX-A8A has the 4K/120Hz.

The AV receiver passes "native" 8K signals from a video source to 8K TV without any encoding, with the 8k pass-through features. The 8K path-through is available on Yamaha RX-A8A.

Denon AVR-S940H got 7 points for the multichannel surround sound and Yamaha RX-A8A got 8.

Auro 3D gives a bit more versatility than Dolby Atmos or DTS:X and provides a hemispherical sound and enables a receiver to produce 3D sound stages. Yamaha RX-A8A has Auro-3D on its feature list.